On February 18, 2008, Russian Ambassador to Tokyo Mikhail M. Bely presented the Russian Federation Order of Friendship to Daisaku Ikeda, SGI president, at the Russian Embassy in Tokyo. Mr. Ikeda was recognized for his wide-ranging contributions to the development of Russo-Japanese relations and bilateral exchange for over 30 years. 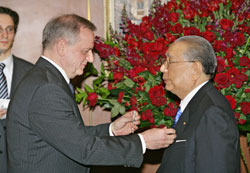 Ambassador Bely paid tribute to Mr. Ikeda's efforts of building bridges among humanity through cultural exchange, and commended him for his profound understanding of diverse philosophies and cultures. He thanked the SGI president for his unceasing dedication to strengthening interchange between their two countries on a people-to-people basis, as well as cultivating interest in both Japanese and Russian culture and language.

In his acceptance speech, Mr. Ikeda expressed his appreciation for the honor, concurring with the sentiments of the great Russian poet Aleksandr Pushkin who believed abiding friendship is the triumph of human dignity. Mr. Ikeda stated that his friendship with Russian people from all walks of life transcends ideological and national boundaries and will endure through changing circumstances. He concluded by sharing his determination to devote further energy to broadening and deepening cultural and educational exchanges with Russia, focusing especially on youth.

During his first visit to the then Soviet Union in 1974, Mr. Ikeda was criticized for visiting a communist country. On that occasion he met with Premier Aleksey Kosygin to discuss prospects for peace at a time of great global tension.

Mr. Ikeda has visited the former USSR and Russia six times to meet and hold dialogues with leaders and cultural figures. He has promoted extensive educational and cultural exchanges through institutions he founded, including Soka University, the Institute of Oriental Philosophy, the Min-On Concert Association and the Tokyo Fuji Art Museum. He also promoted the showing in Russia of exhibitions devoted to peace such as the SGI's "Nuclear Arms: Threat to Our World," held in Moscow in 1987. 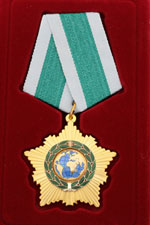 More than one million people in Japan have been exposed to Russian culture through national tours of over 40 Russian dance and music groups at the invitation of the Min-On Concert Association from 1966 onwards. Since Soka University Japan and Moscow State University signed a mutual academic exchange agreement 1975, some 500 students have participated in the two-way exchange.

An exhibition of 100 artworks from the State Russian Museum is currently showing at the Tokyo Fuji Art Museum in Hachioji, Tokyo.

On January 9, Russian President Vladimir Putin announced in a presidential decree the awarding of the Order of Friendship which recognizes those credited with strengthening friendship and cooperation with the Russian Federation in the areas of science, culture, economics and peace. Mr. Ikeda was nominated for the honor by leading Russian figures such as former Soviet President Mikhail Gorbachev, Moscow State University Rector Dr. Victor Sadovnichy, former Russian cosmonaut Dr. Aleksander Serebrov and writer Chingiz Aitmatov.

[Adapted from an SGI Office of Public Information press release dated February 18, 2008 and an article in the February 19, 2008, issue of the Seikyo Shimbun, Soka Gakkai, Japan]