On January 20, 2008, the Askov-Ikeda Study (AIS) Group at Askov Folk High School (AFHS) sponsored the Ikeda Seminar 2008 at the World Culture Center in Copenhagen, Denmark. Four educators discussed the philosophy and pedagogy of SGI President Daisaku Ikeda with an audience of some 200 SGI-Denmark members, their friends and guests. 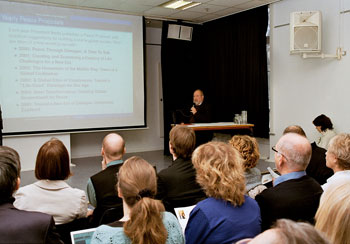 John Scales Avery, professor emeritus of the H.C. Ørsted Institute at University of Copenhagen introduced Mr. Ikeda's background and achievements. He noted that through the many difficulties and obstacles Mr. Ikeda has faced, he has persistently propounded the concept of "human revolution"--an inner directed, positive transformation that is reflected in one's environment--and the values of education, culture and dialogue as a foundation for humanity's peace and happiness.

Iben Valentin Jensen, lecturer and assistant professor at Teachers College, CVU Southern Jutland, spoke about her visit to Soka Schools in Japan in December 2007. She remarked that she was moved by the students' integrity and spirit of contributing to the welfare of others. Through her exposure to Soka Education, Asst. Professor Jensen felt she could better understand the original spirit of Danish pedagogy, embodied by the teachings of N.F.S. Grundtvig (1783-1872).

Professor Mikael Aktor of the Institute of Philosophy, Education and the Study of Religions at the University of Southern Denmark, noted that the SGI movement was founded on two pillars. The first, in the secular sphere, advocates for the empowerment of ordinary people, a struggle launched by first Soka Gakkai President Tsunesaburo Makiguchi when he established Soka Gakkai during the militarist regime in Japan. The second pillar, in the religious sphere, generates hope, based on belief in the possibility for change through tapping the boundless potential within one's life through faith and Buddhist practice, which second Soka Gakkai President Josei Toda excelled at elucidating and communicating. Professor Aktor said Mr. Ikeda has built on and employed both pillars to develop a global movement for peace, based on compassion, respect for others and the dependent origination of all life—concepts elucidated in the Lotus Sutra. 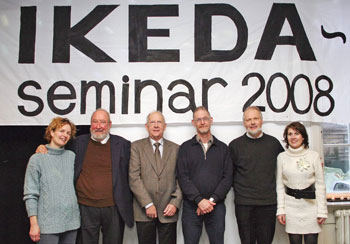 AIS Chair Hans Henningsen, a former principal of Askov Folk High School, traced the development of Danish thought and enlightenment within the Folk High School movement to Grundtvig, who emphasized dialogue and diversity as dynamic and positive forces in society. Grundtvig believed that a true democracy could only be sustained when people are enlightened. Mr. Henningsen referred to his ongoing dialogue with Mr. Ikeda and said they both agree that religion will play a very important role in the future of global society and that open dialogue based on mutual respect gives rise to creative and constructive development. Mr. Henningsen urged the young people present to follow in the footsteps of Mr. Ikeda, a rare person with the courage and wisdom to communicate to global society the values of enlightenment and dialogue.

[Adapted from an SGI-Denmark report and an article in the January 31, 2008, issue of the Seikyo Shimbun, Soka Gakkai, Japan; photos courtesy of SGI-Denmark]