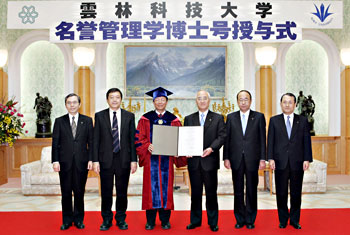 Founded in 1991 in Douliou, Central Taiwan, YunTech has colleges in engineering, management, design, humanities and applied sciences. Some 9,300 students are enrolled in undergraduate and graduate courses.

President Lin remarked in his citation that Mr. Ikeda is a leading thinker of Japan who follows a philosophy of upholding the dignity of life and is dedicated to the betterment of global society. He entrusted the diploma to Soka University President Hideo Yamamoto in proxy. Mr. Ikeda sent a poem in Chinese expressing his appreciation as well as an acceptance speech. He noted YunTech's impressive achievements in the vanguard of Taiwan's leading edge technology and expressed his resolve to continue advancing humanistic education, which he sees as the foundation of a future peaceful society.

[Adapted from an article in the January 22, 2008, issue of the Seikyo Shimbun, Soka Gakkai, Japan]