On January 26, 2008, Sri Lanka Rupawahini Corporation (SLRC), Sri Lanka's national television, aired Kanta and the Deer, the first of an animated series in Sinhalese based on original children's stories by Daisaku Ikeda. A total of 17 stories will be aired every Saturday throughout the nation. On January 24, Soka Gakkai Lanka Buddhist Association General Director Ranjith Rupasinghe appeared on a special program introducing Mr. Ikeda and the animated adaptations, which promote values such as courage, perseverance and consideration. 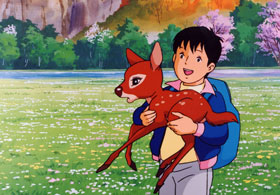 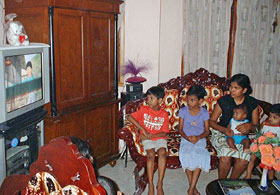 Following the airing of Kanta and the Deer, SLRC received positive feedback from viewers. Dr. Prasanna Liyanage, Senior Lecturer in Geomatics at Sabaragamuwa University of Sri Lanka, commented, "The story portrays genuine human character and offers something of interest to even adults."

In 2007, 14 stories were aired on the National Geographic Channel in various languages in India, Nepal, Bhutan, Bangladesh, Pakistan, Sri Lanka and the Maldives.

[Adapted from an article in the February 4, 2008, issue of the Seikyo Shimbun, Soka Gakkai, Japan]