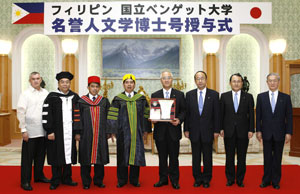 Dr. Colting (4th from left) and Mr. Del-Amen (3rd from left) traveled to Japan for the conferral ceremony at Soka University.

In a citation, Dr. Colting lauded Mr. Ikeda's keen insights into the problems confronting humankind today and his ability to envision solutions to them. He also noted Mr. Ikeda's idea regarding the mission of the university in the twenty-first century to foster an ethic of global citizenship among youth, transcending national and regional interests.

In a message, Mr. Ikeda expressed his resolve to continue his efforts for the sake of peace and people's empowerment through education in concert with BSU President Colting and the university faculty.

BSU was founded in 1916 and has a focus in the fields of agriculture, education and medicine. The university's educational goals emphasize service to society and it has collaborated with environmental experts and researchers to boost farming in the local community. BSU has also been a forerunner in environmental protection and natural resource development.

[Adapted from an article in the July 11, 2008, issue of the Seikyo Shimbun, Soka Gakkai, Japan]