On July 12, 2008, the Indonesia University of Education (UPI) presented Daisaku Ikeda with the university's highest award for his life-long dedication to education and peace. UPI Rector Sunaryo Kartadinata and Vice Rector Chaedar Alwasilah, accompanied by their wives Mrs. Euis Sunaryo and Mrs. Senny Alwasilah, visited the SGI-Indonesia headquarters in Jakarta and presented the award. It was received by Mr. Ikeda's son, Hiromasa, who was in Indonesia on his father's behalf to attend the 50th anniversary celebrations of the establishment of diplomatic relations between Indonesia and Japan.

Prof. Sunaryo expressed his strong hopes that the award would serve to highlight Mr. Ikeda's commitment and action for the construction of a global society founded on education and peace and inspire others to follow in his footsteps. Mr. Hiromasa Ikeda read a message of appreciation from his father, which was followed by a dynamic performance by UPI's renowned dance troupe Kabumi.

Located in Bandung, Indonesia, UPI was established as Teachers' Education College in 1954. 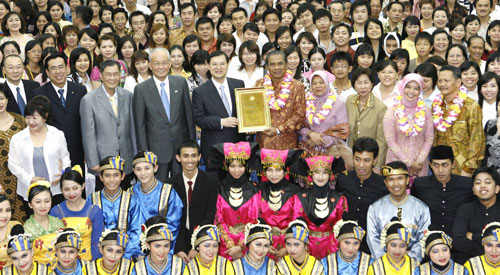 Rector Sunaryo (center, with lei) and Hiromasa Ikeda (to his left) holding the certificate

[Adapted from an article in the July 21, 2008, issue of the Seikyo Shimbun, Soka Gakkai, Japan]