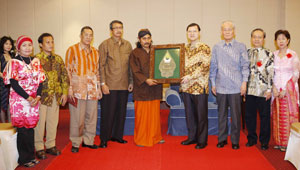 On July 12, 2008, the Indonesian National Youth Committee (KNPI) presented Daisaku Ikeda, SGI president, with a special award for his lifetime contributions to the promotion of peace, culture and education. KNPI Chair Hasanuddin Yusuf presented the certificate for Mr. Ikeda to his son, Hiromasa Ikeda, at KNPI headquarters in Jakarta. Remarking that KNPI was honored to recognize Mr. Ikeda for his achievements, Mr. Hasanuddin expressed his determination for KNPI and the SGI to strengthen their collaborative efforts to realize a world of peace through the promotion of nonviolence.

KNPI, which has a membership of 90 million, strives to develop leadership capacity among Indonesian youth and promotes friendship exchanges with youth from other countries. 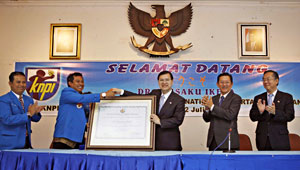 KNPI Chair Hasanuddin (foreground, 2nd from left) entrusts the award for Mr. Ikeda to his son, Hiromasa (3rd from right)

On the following day, July 13, the Indonesian Muslim Artists and Culturalists Institute (Lesbumi), honored Mr. Ikeda for his dedicated efforts to advance education and culture toward the creation of a peaceful society. Lesbumi Chair Sastro Ngatawi presented a commendation plaque for Mr. Ikeda to his son Hiromasa at a conferral ceremony held at the Jakarta International Event and Convention Centre. Mr. Sastro commented that the SGI leader's efforts have inspired people of diverse backgrounds to unite through culture and the arts.

At the same venue later in the day, Soka Gakkai Indonesia (SGI-Indonesia), Lesbumi and KNPI collaborated on a musical extravaganza in commemoration of the 50th anniversary of the establishment of diplomatic relations between Indonesia and Japan. Some 350 performers put on a dynamic show for an audience of 5,000.

In recent years, SGI-Indonesia, often in collaboration with like-minded organizations, has been furthering goodwill in society through various cultural and peace events. In August 2005, SGI-Indonesia and KNPI cosponsored a large-scale youth peace concert commemorating Indonesia's 60th Independence Day. The following year, SGI-Indonesia women sponsored a women's peace conference in Jakarta, promoting a culture of peace through the solidarity of women. Also in 2006, SGI-Indonesia cohosted with KNPI and the Indonesia Photographers' Association "Dialogue with Nature," an exhibition of nature and scenic photographs taken by Mr. Ikeda in Japan and abroad, which toured 23 Indonesian cities from March through September and drew 420,000 visitors.

An Indonesian singer and musician are accompanied by SGI-Indonesia women performing on the Angklung, a traditional Indonesian bamboo instrument