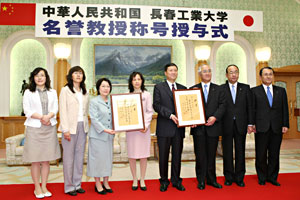 Since its establishment in 1952, Changchun University of Technology has grown to become a comprehensive university with 17 colleges and is nationally recognized as an outstanding educational institute.

During the ceremony, President Zhang noted that because of his commitment to fostering capable, creative individuals who are responsive to the needs of the times, he found deep resonance with Mr. Ikeda's vision for humanity's peace, culture and education. He said Mrs. Ikeda, whose way of life has empowered other women and inspired them with hope, is a positive role model for the many women faculty and students at his university. Referring to the manifold contributions made by Mr. Ikeda toward bilateral exchange, he hoped for the further development of friendly relations between Changchun and Soka universities.

Professor Cui stated that for the Changchun University Foreign Language Institute, where 92 out of 100 faculty members and 630 out of 680 students are women, it was a singular honor to have Mrs. Ikeda, who is widely engaged in activities for peace in partnership with her husband, as its honorary professor.

In his acceptance speech read by proxy, Mr. Ikeda referred to the university's tradition of friendly competition in learning and its progressive vision of leadership for a contributive society, sharing his determination to further develop education for the sake of posterity.

[Adapted from an article in the June 3, 2008, issue of the Seikyo Shimbun, Soka Gakkai, Japan]