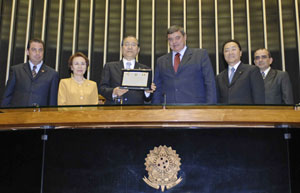 The Chamber of Deputies (lower house) of the Federative Republic of Brazil recently held an assembly honoring Daisaku Ikeda, SGI president, for his contributions to peace, culture and education, at the National Congress in Brasilia, Brazil's capital. The date, June 6, 2008, commemorated the birthday of first Soka Gakkai President Tsunesaburo Makiguchi (1871-1944). Deputy Gervásio Silva, representative of Santa Catarina State, who initiated the special assembly, presented a plaque inscribed with a citation to an SGI-Brazil representative, who accepted it on Mr. Ikeda's behalf. The event was televised on a national cable TV station.

Some 110 local SGI members and residents attended the event to hear Deputy Silva's commemorative address, in which he introduced Mr. Ikeda's concrete actions to advance world peace, beginning with his efforts to promote intercultural understanding and foster individuals in the fields of culture and education. Expressing his pleasure at paying tribute to Mr. Ikeda during the year that marks the centennial of the first wave of Japanese immigration to Brazil, Mr. Silva commented, "Peace cannot be realized if we remain passive. It is only through active efforts like those of the SGI president that peace will be realized." Following the ceremony, Mr. Silva remarked that humanity must emulate Mr. Ikeda's ideals and actions in order to build trust across cultural differences.

Over the years, Mr. Ikeda has met and held dialogues with numerous Brazilian cultural, political and educational figures, both in Brazil and in Japan.

[Adapted from an article in the June 11, 2008, issue of the Seikyo Shimbun, Soka Gakkai, Japan]