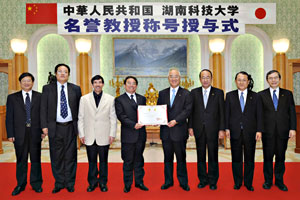 On March 1, 2008, Hunan University of Science and Technology (HNUST), Xiangtan City, China, conferred an honorary professorship upon Daisaku Ikeda, Soka University (SU) founder and SGI president, in recognition of his manifold contributions to education and to Sino-Japanese friendship. The conferral took place on the SU campus in Hachioji, Tokyo, attended by an HNUST delegation led by the university's president Tian Yinhuan. SU President Hideo Yamamoto received the certificate on behalf of Mr. Ikeda from President Tian. This marked the 230th academic honor Mr. Ikeda has received to date.

HNUST, with its 19 colleges in the sciences and humanities and 71 specialized courses in ten fields. is located in Xiangtan, which has flourished for over a millennium as a city of culture and learning. Xiangtan, together with Changsha and Zhuzhou, presently constitute the political, economic and cultural triangle of Hunan Province.

President Tian lauded Mr. Ikeda's longstanding endeavors to advance academic ties with universities around the world and to unite people on the basis of friendship, the foundation of peace. Concurring with Mr. Ikeda's educational mandate of fostering outstanding individuals who will make meaningful contributions to society, Professor Tian remarked that the SUA founder is a role model for educators. He further introduced HNUST's decision to establish a Daisaku Ikeda Research Center at the university.

In an acceptance speech read by SU Associate Vice President Tadashige Takamura, Mr. Ikeda expressed his heartfelt appreciation to President Tian and the HNUST delegation for traveling to Japan to present the award. Mr. Ikeda referred to Fan Zhongyan (989–1052), a prominent statesman, literary figure, strategist and educator of the Song dynasty, who sought to reform the court by fostering capable individuals through education. Mr. Ikeda suggested that the essence of human education is crystallized in HNUST's four precepts: (1) to constantly seek truth based on solid fact, (2) to continuously seek fresh creativity, (3) to improve one's character and act with sincerity, and (4) to uphold noble ideals with wholehearted devotion. In closing, Mr. Ikeda resolved to work together with President Tian and the HNUST faculty to develop a steady current of competent youth in China and Japan and the world over, who are capable of leading society.

[Adapted from an article in the March 2, 2008, issue of the Seikyo Shimbun, Soka Gakkai, Japan]