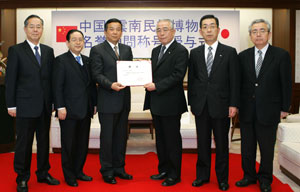 The presentation ceremony took place at the Min-On Culture Center in Tokyo, where Museum Director Xie Mohua presented a certificate naming Mr. Ikeda an honorary advisor to Min-On President Hiroyasu Kobayashi, who accepted it on behalf of Mr. Ikeda, Min-On's founder. Director Xie belongs to the Bai Nationality and is involved in research on ethnic minority groups within China, having served as board member of the Chinese Society of Museums. Mr. Xie said the museum's efforts to enhance and respect diverse cultures resonate with Mr. Ikeda's advocacy of global citizenship and his efforts to advance peace and understanding in the international community.

In a message read by Min-On President Kobayashi, Mr. Ikeda described culture as the quintessence of human activities, pointing to the universal values at the heart of each distinctive culture that foster understanding, harmony and creativity among peoples. As varying hues of flowers enhance the beauty of a garden, he said, the diversity of human cultures makes evident the full beauty of humanity. Remarking that Yunnan is just such a rich blend of cultures, Mr. Ikeda hailed the Yunnan museum as a nexus of a culture of peace.

An exhibition room at the Yunnan Nationalities Museum

The Yunnan Nationalities Museum is located in Yunnan Province, home to 26 minority cultures, making it the most culturally diverse region in China. The area has prospered since ancient times as the southwestern route of the Silk Road when caravans of Tibetan traders came to Yunnan to trade their highly prized horses for Chinese produce. The museum was established at the suggestion of Premier Zhou Enlai during his visit to Kunming in April 1955, where he had viewed artifacts of the region's diverse minority groups. The Chinese premier proposed that Yunnan establish international exchanges based on its rich variety of ethnicities. Today, the museum houses some 40,000 artifacts such as clothing, handicrafts, textiles, religious implements, ancient manuscripts, weaponry and musical instruments, and promotes cultural exchanges with overseas museums.

The Chinese museum will host "Dialogue with Nature," an exhibition of Mr. Ikeda's photography, in April 2008.

[Adapted from an article in the March 18, 2008, issue of the Seikyo Shimbun, Soka Gakkai, Japan]