On March 15, 2008, the state of Georgia, USA, proclaimed SGI President Daisaku Ikeda and Mrs. Kaneko Ikeda honorary citizens in recognition of their longstanding contributions to peace, culture and education.

Adopting a resolution presented by Senators Horacena Tate and Vincent Fort, the State Assembly commended Mr. and Mrs. Ikeda for their commitment to "creating a climate of peace throughout the world" through their promotion of dialogue, intercultural exchange, education, citizen diplomacy and "a philosophy of character development and social engagement for peace."

The resolution also recognized SGI-USA's contributions "to the Atlanta community for more than 30 years" through its various activities, such as the SGI-USA youth "Victory Over Violence" campaign that seeks to raise awareness of the need to counter and overcome violence in all its forms.

On the same day, SGI-USA collaborated with the U.S.-based M. K. Gandhi Institute for Peace and Reconciliation for a showing of the SGI exhibition "From A Culture of Violence to a Culture of Peace: Transforming the Human Spirit" at the Martin Luther King Jr. International Chapel at Morehouse College in Atlanta, Georgia. Some 2,000 SGI-USA youth from Georgia and surrounding states gathered for a peace rally at the same venue. 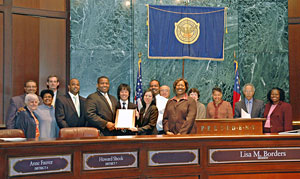 Previously, on March 3, the Atlanta City Council commended the local SGI-USA youth for their dedicated efforts to spread a culture of peace through a dialogue campaign and their promotion of the SGI's "Building a Culture of Peace for the Children of the World" exhibition, which supports the United Nations' Culture of Peace initiative.

[Adapted from an article in the March 29, 2008, issue of the Seikyo Shimbun, Soka Gakkai, Japan]