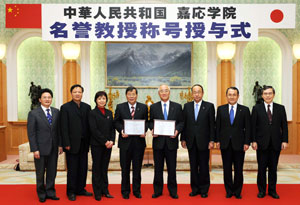 On March 31, 2008, Jiaying University (JU), located in Meizhou City, Guangdong Province, China, conferred honorary professorships upon Daisaku Ikeda, Soka University (SU) founder, and his wife Kaneko Ikeda in recognition of their manifold contributions to the development of peace, culture and education as well as to Sino-Japanese friendship. JU President Cheng Biao entrusted the certificates of honorary professorship to SU President Hideo Yamamoto during a conferral ceremony at the SU central tower in Hachioji, Japan.

Founded in 1913 as a women's teachers college, Jiaying University today provides comprehensive education for some 15,000 students studying in 14 academic departments. The university is world-renowned for its research of China's Hakka culture and accepts overseas students interested in the study of Hakka traditions from a variety of disciplinary perspectives including anthropology, history, folklore and religious studies.

In his citation, Professor Cheng recognized Mr. Ikeda as one of the first Japanese to advocate the normalization of Sino-Japanese diplomatic relations and commended him for engaging in dialogue with leading figures of every sector of global society with the belief that only through honest, wholehearted dialogue can humanity establish mutual trust and understanding. He also recognized Mrs. Ikeda as an exemplary role model for her dedicated efforts together with her husband for the sake of world peace, culture and education.

In a message read in proxy, Mr. Ikeda emphasized education's important role for overcoming disparity and transcending differences to build a new society. He described education as a sacred undertaking for inspiring the blossoming of each person's unique potential to contribute to a harmonious and creative coexistence. This ideal, he said, is reflected in the Buddhist principle of "cherry, peach, plum and damson blossoms," which expounds the unique character and beauty of all living entities.

[Adapted from an article in the April 1, 2008, issue of the Seikyo Shimbun, Soka Gakkai, Japan]