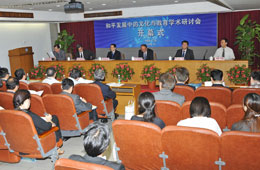 In May 2008, two new Daisaku Ikeda research centers opened in Guangdong Province, China. The Guangdong Academy of Social Sciences launched the Guangdong Daisaku Ikeda Research Center on May 20, 2008, and on May 21, South China Normal University opened its Institute of Dr. Daisaku Ikeda's Philosophy of Education. There are currently around 20 similar centers in China focusing on research related to Mr. Ikeda.

Exhibitions of Mr. Ikeda's literary works were held at the institutes coinciding with the opening ceremonies. Some 200 guests, including faculty members and students, attended opening of the Institute of Dr. Daisaku Ikeda's Philosophy of Education at South China Normal University. University President Wang Guojian stated that the aim of the institute is to deepen the study of Mr. Ikeda's philosophy and to further mutual understanding between China and Japan on an intercultural and educational level as well as contributing to global peace. Remarking that Mr. Ikeda's works contain the essence of humanism, pacifism and culture, Professor Wang said a thorough study of these works will serve as a foundation for the realization of global harmony. 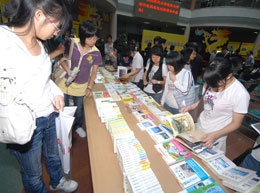 On May 21-22, marking the launch of the centers, the two schools organized an academic symposium at South China Normal University titled "Culture and Education Based on Peace-Oriented Development." Some 70 scholars and guests attended the event, where 23 scholars explored Mr. Ikeda's thoughts on culture and education.

[Adapted from an article in the June 7, 2008, issue of the Seikyo Shimbun, Soka Gakkai, Japan]