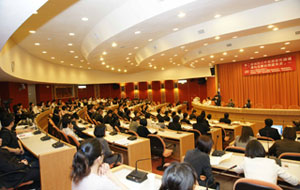 Chinese Culture University (CCU) in Taipei, Taiwan, which opened the Ikeda Research Center in 2003, hosted its second research forum on the philosophy of Daisaku Ikeda on May 8, 2008. Some 200 Taiwan researchers and experts in education attended the forum, including those from the hosting university, the National Yunlin University of Science & Technology, Tainan University of Technology and Southern Taiwan University of Technology. The papers presented covered a broad spectrum of topics, from pacifism and environmental preservation to leadership and fostering youth.

Former CCU president Lin Tsai-mei, currently director of the Ikeda Research Center, presented a paper that detailed Mr. Ikeda’s achievements for peace. Remarking that the current emphasis on knowledge-oriented education is not sufficient for solving global problems, she suggested that the study of Mr. Ikeda's thinking, and Soka education, with its ideals of value-creation , could make a significant contribution to the enhancement and promotion humanity's peace and well-being

CCU Board of Regents Chair Chang Jen-hu, who collaborated with Mr. Ikeda in the dialogue series “Kyoiku to bunka no odo" (tentative translation: The Grand Path of Education and Culture) in Todai, a Japanese education magazine, discussed Mr. Ikeda's perspectives on peace based on a reading of the SGI leader's dialogues with British historian Arnold J. Toynbee (1889–1975) and former Soviet President Mikhail Gorbachev and his 1991 lecture on soft power at Harvard University, USA.

[Adapted from an article in the June 4, 2008, issue of the Seikyo Shimbun, Soka Gakkai, Japan]