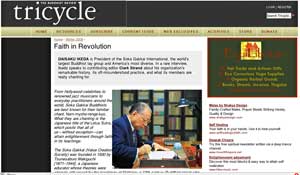 The winter 2008 edition of Tricycle, a leading U.S.-based magazine on Buddhism in the West, carries an interview with Daisaku Ikeda, SGI president, which can be read online at the magazine's website. "In a rare interview, Ikeda speaks to contributing editor Clark Strand about his organization's remarkable history, its oft-misunderstood practice, and what its members are really chanting for," says the article's byline.

As the Tricycle editors point out, while SGI is "the world's largest lay Buddhist group and the largest, most ethnically diverse school in America . . . students of meditation approaches tend to know little, if anything of SGI."

In the interview Mr. Ikeda addresses a common misperception that SGI's Buddhist practice is based simply on chanting for material benefits; discusses the core concept of "human revolution" as a contemporary description of the process of enlightenment; and describes the need for Buddhism to develop beyond its historical and cultural settings to "encounter, learn and evolve," while staying true to its essence. This universality and process of rediscovery, he says, is the essential spirit of Buddhism and a core purpose of the SGI.

Read the interview at: https://tricycle.org/magazine/faith-revolution/

[Report of an article in the Winter 2008 issue of Tricycle magazine by the Soka Gakkai International Office of Public Information, Tokyo, Japan]