Daisaku Ikeda Among Recipients of Award from Indonesian University 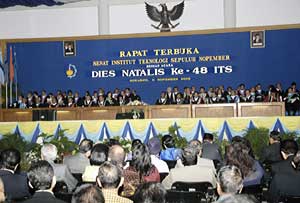 On November 11, 2008, Daisaku Ikeda was among the recipients of the first International Cooperation Award conferred by Surabaya Institute of Technology (ITS), an Indonesian university specializing in civil engineering and industrial, marine and information technology. Soka University founder Ikeda was recognized for his global contributions to the advancement of education. Among the nine other recipients were former East Java Governor Muhammad Noer and Japan International Cooperation Agency (JICA) President Sadako Ogata, who served as United Nations High Commissioner for Refugees from 1991-2001. The conferral took place at the ITS campus auditorium in Surabaya, East Java Province, Indonesia, during a ceremony commemorating ITS's 48th anniversary. Attending were former ITS president and present Indonesian Minister of Communication and Information Mohammad Nuh, ITS President Ir Priyo Suprobo and some 800 representatives of the ITS faculty and students. Soka University President Hideo Yamamoto received Mr. Ikeda's award from Professor Suprobo in proxy.

ITS, founded in 1960, is recognized as an institution offering instruction in leading edge technology in Indonesia. The university has an enrollment of some 18,000 students and currently offers courses in five faculties: mathematics and natural science, industrial technology, civil engineering and planning, marine engineering and information technology.

Following a speech by President Suprobo, Minister Nuh took the podium, stressing ITS's growth and development and its mission to contribute to the betterment of Indonesian and global society. As one of the award recipients, Mr. Ikeda's profile and global efforts for peace and education were introduced to the audience.

ITS and Soka University entered into an academic exchange agreement in 2006. SU Deputy Vice President Hirotomo Teranishi and Professor of Engineering Tatsuki Toda also attended the ceremony. This year, 2008, marks the 50th anniversary of the establishment of diplomatic relations between Indonesia and Japan.

[Adapted from an article in the November 21, 2008, issue of the Seikyo Shimbun, Soka Gakkai, Japan]