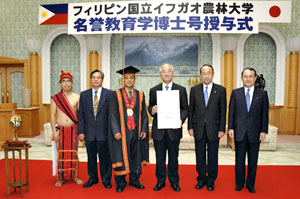 On September 18, 2008, Ifugao State College of Agriculture and Forestry (ISCAF) in Ifugao Province, the Philippines, conferred an honorary doctorate of education upon Daisaku Ikeda, Soka University (SU) founder. Mr. Ikeda was recognized for his achievements in education, literature, art, science and philosophy and for his landmark contributions to cultural exchanges, environmental preservation, youth development and peace. The presentation of the honorary degree took place at the SU Central Tower in Hachioji, Tokyo. ISCAF President Serafin L. Ngohayon entrusted the certificate for Mr. Ikeda to SU President Hideo Yamamoto, who accepted it in proxy. Also attending were University of the Philippines Professor Sylvano D. Mahiwo, an ISCAF consultant, and ISCAF lecturer Elpidio B. Basilio Jr.

Dr. Ngohayon remarked that ISCAF is pleased to award its first honorary doctorate to Mr. Ikeda, who has devoted much of his life to empowering people and advocating for world peace, and whose integrity and contribution to humanity are a source of great inspiration. Dr. Ngohayon expressed his refreshed resolve to work for the development of youth education, the safeguarding of culture and the promotion of peace.

In a message, Mr. Ikeda extended his sincere appreciation for the conferral and commended ISCAF for its pioneering efforts in agricultural education, the value of which are particularly significant at this time when world food production and food security is at such a critical juncture. Underscoring the importance of educational and cultural exchanges in a pluralistic global society, Mr. Ikeda referred to the Philippine's traditional spirit of bayanihan, derived from the Tagalog word "bayan" meaning town, nation or community and symbolizing communal unity and cooperation, as the fundamental spirit essential to fostering global citizenship.

ISCAF began as Nayon Settlement Farm School in 1920, mainly offering instruction in vegetable gardening and poultry farming. In 1982, it was integrated with several schools in the area and upgraded to a college. Today it offers courses for undergraduate and graduate degrees, including an expanded tertiary program which addresses the needs of government employees who require additional college-level education.

[Adapted from an article in the September 19, 2008, issue of the Seikyo Shimbun, Soka Gakkai, Japan]