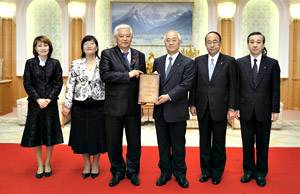 Issyk-Kul State University (IKSU) in the Kyrgyz Republic, recently honored Daisaku Ikeda, Soka University founder and SGI president, for his contributions to educational and cultural exchanges between Japan and the Kyrgyz Republic. A ceremony conferring Mr. Ikeda with an honorary professor of IKSU took place on April 10, 2009 at the Soka University Central Tower in Hachioji, Tokyo. IKSU Rector Toktosapiev Alymbai and Abdieva Banur, a part-time lecturer at IKSU and chair of the the NGO, Civic Initiatives Center "Leader," traveled to Japan to make the appointment. Soka University President Hideo Yamamoto accepted the honorary professorship certificate and university robe on behalf of Mr. Ikeda.

IKSU's official name is Issyk-Kul State University after K. Tynystanov. Kasim Tynystanov (1901-38) was a progressive Kyrgyz education minister, who fell victim to Joseph Stalin's purges prior to World War II. Today, IKSU enrolls some 7,000 students in eight faculties, including natural science and bioengineering, and conducts academic exchanges with universities in over 20 countries.

In his conferral speech, Rector Toktosapiev welcomed Mr. Ikeda to the IKSU faculty and called attention to the numerous dialogues Mr. Ikeda has engaged in with leaders and thinkers of various fields, including Kyrgyz writer Chingiz Aitmatov. Through the dialogues, Rector Toktosapiev remarked, Mr. Ikeda draws connections between our ordinary daily lives, cultural traditions and universal values in straightforward language and with humor and magnanimity. He said many of the dialogues have been read by university students and faculty, as well as himself.

In a message read in proxy, Mr. Ikeda commented that IKSU's namesake, Kasim Tynystanov, and his own teacher, Josei Toda, were born just one year apart at the turn of the twentieth century at a time of widespread warfare and oppression. Both men upheld justice and were persecuted for their convictions. Tynystanov sacrificed his life in a clash with a totalitarian regime while devoting himself to advancing education, culture and learning in his homeland. Mr. Ikeda commended IKSU for perpetuating Tynystanov's noble spirit and said he was deeply honored by the accolade he received, which he dedicated to his teacher, Mr. Toda.

Expressing his deep respect to Kyrgyztan for signing and ratifying the Central Asian Nuclear-Weapon-Free Zone treaty with four other central Asian countries, the first such treaty to be enacted in the northern hemisphere, Mr. Ikeda conveyed his hopes that IKSU would foster many talented global citizens who will contribute to lasting world peace.

[Adapted from an article in the April 11, 2009, issue of the Seikyo Shimbun, Soka Gakkai, Japan]