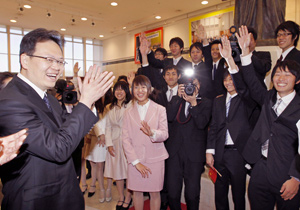 On December 23, 2009, Xi'an Peihua University of China presented Daisaku Ikeda, founder of Soka University, with an honorary professorship in recognition of his contributions to cultural exchanges between China and Japan, and for his distinguished record of humanitarian service to the international community. Soka University President Hideo Yamamoto received the academic honor--the first the institution has conferred on a Japanese national--on behalf of Mr. Ikeda.

Representing the university were Board of Directors Chair Jiang Bo and Deputy Dean Ma Shumao. In the citation, Chair Jiang explained that the university library has a special section devoted to Mr. Ikeda's works, which serves not only to introduce the faculty and students to his insights on education, world peace and Sino-Japanese friendship, but as a means to study the Japanese language and gain a better understanding of Japanese culture.

In a message read by proxy, Mr. Ikeda expressed appreciation for the citation and attributed his longstanding admiration for China to the influence of his mentor, Josei Toda, who insisted that Japanese youth study China's history and literature for the extraordinary cultural debt Japan owes the country. Mr. Ikeda also elaborated on the importance of courage in Soka education, which enables an individual to create value amid adversity and forge ahead in even the harshest of times.

Originally dedicated in 1928 as a vocational school for women, Xi'an Peihua University became co-educational in 2003. Today, it offers 60 undergraduate programs, from medical and legal colleges to management and information engineering, and has a student enrollment of over 34,000. 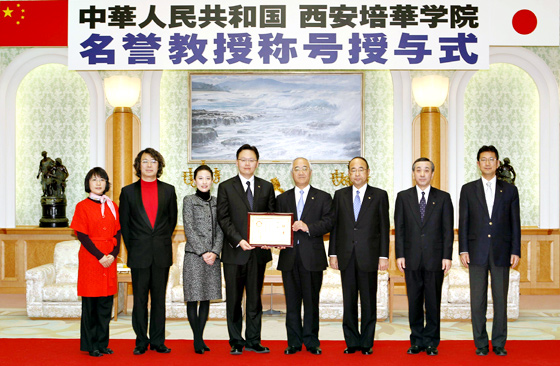 [Adapted from an article in the December 24, 2009, issue of the Seikyo Shimbun, Soka Gakkai, Japan]