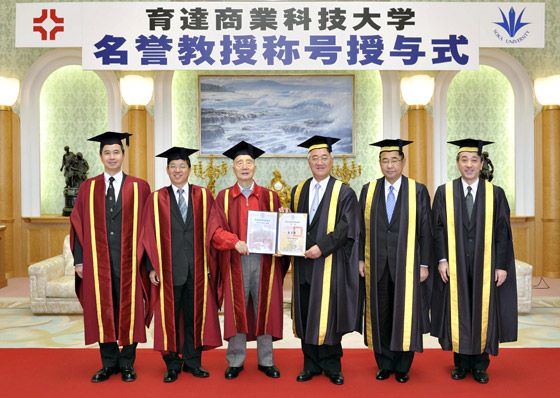 Founded in 1999 as Yu Da College of Business, the institute was renamed Yu Da University in August 2009. Leadership in domestic and international commerce is the focus of study for the 8,000 students matriculating in Yu Da University's three undergraduate schools: Finance and Economics, Management, and Humanities and Social Sciences. The university has also developed academic exchanges with more than 40 institutes of higher learning in nine countries since it was established 10 years ago.

In a message read by Soka Women's College President Hideaki Ishii, Mr. Ikeda expressed his heartfelt appreciation for the accolade. Emphasizing that human beings are the source of peace, culture and prosperity and that education is the sacred undertaking for cultivating people's creative potential, Mr. Ikeda affirmed his belief that those who are dedicated to the development of education, such as Yu Da University founder Wang, are the ultimate victors and exemplars. Education, he said, is a profound undertaking for breaking through the morass of the contemporary age and opening the way to humanity's happiness into the eternal future.

[Adapted from an article in the December 9, 2009, issue of the Seikyo Shimbun, Soka Gakkai, Japan]