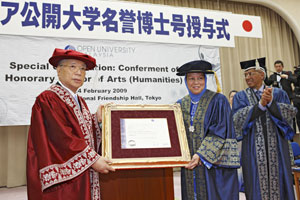 Established in 2000, OUM is Malaysia's first open and distance learning university, supporting the objectives of the Multimedia Super Corridor (MSC), a government initiative to stimulate development through the application of multimedia information technologies. OUM offers 70 programs to students of all ages and background, with support from a consortium of eleven public universities in Malaysia. To date, 78,000 students in 20 countries have studied through the OUM network.

In a citation, Senior Vice President Fadzil described Mr. Ikeda's life as a genuine pursuit of humanistic ideals transcending social, cultural and political boundaries, as illustrated by his dedication to promoting lasting peace and cross-cultural understanding through dialogues with global figures.

Chancellor Datin Seri Jeanne Abdullah, officiating at the ceremony, stated that Mr. Ikeda is the first international recipient of the honorary doctoral degree from OUM. She said his aspirations for a society that values education as the cornerstone of growth and development are mirrored in the work and efforts of the SGI, and in the same spirit, OUM strives to provide people with the opportunity to improve their lives and prospects through lifelong learning. Speaking of the commitment to people's empowerment shared by OUM and Soka University, she stated her belief that it is only through the empowerment of people that nations can progress, and said she hoped for the continued strengthening of relations between the two universities.

Mr. Ikeda expressed his heartfelt appreciation for the distinction from OUM, affirming his commitment to lifelong learning. Reiterating his call for the twenty-first century to be the "century of women," he described the profound influence of mothers in determining the development of a society. He spoke about the chancellor's mother and said he had been moved to hear how she had encouraged her daughter to always reflect on whether she has remained true to herself, and had advised her to live with conviction and sincerity, to always respect others, and to be patient and humble--then she would have nothing to fear. Mr. Ikeda expressed his admiration for the chancellor in continuing to live up to her mother's advice by striving to fulfill a noble purpose in life as an exemplary daughter and a humane leader.

[Adapted from an article in the February 25, 2009 issue of the Seikyo Shimbun, Soka Gakkai, Japan]