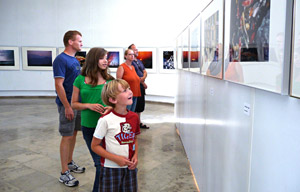 "Dialogue with Nature," an exhibition of scenic and nature photographs taken by Daisaku Ikeda in Japan and abroad, opened at the Russelsheim City Hall in a suburb of Frankfurt, Germany, on July 23, 2009. Vice Mayor Jo Dreiseitel and UNICEF's German Chapter member Renate Schelhaas were among the guests who viewed the photographs at the exhibition opening. As a part of the opening ceremonies, pianist Albrecht Schmidt, recipient of the Russelsheim Culture Award, performed three pieces.

In his welcome speech, Mayor Dreiseitel introduced the exhibition as a poetic encounter of the Far East and the West, commenting that each photograph, capturing a particular moment, was remarkable and unique. Mr. Ikeda, through his photographs, he said, inspires confidence and hope and fosters creativity in people, contributing to cultural and friendship interchange. In a message for the exhibition, Mr. Ikeda expressed his hopes that the exhibition would contribute toward strengthening bonds between people and fostering respect for life, love of nature and passion for peace.

[Adapted from an article in the August 9, 2009, issue of the Seikyo Shimbun, Soka Gakkai, Japan]