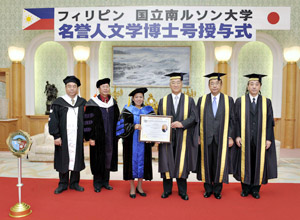 On June 29, 2009, Southern Luzon State University (SLSU) in Quezon, Philippines, awarded Daisaku Ikeda, Soka University founder, the degree of Doctor of Humanities, honoris causa, for his peace and education initiatives. The conferral by proxy took place at the Soka University Central Tower in Hachioji, Tokyo, presided over by SLSU President Cecilia N. Gascon and SLSU Board of Trustees Chair Saturnino M. Ocampo, who is former commissioner of the Commission on Higher Education of the Philippines.

Dr. Gascon delivered the citation, describing Mr. Ikeda as a man of peace and model of altruism who has founded cultural, educational and peace research institutions around the world for the welfare of humanity. She expressed her sympathy with Mr. Ikeda's vision of education, quoting his words, "Education is the light of wisdom by which we can find happiness . . . education is an integrating force for world peace."

In a message, Mr. Ikeda expressed his deep appreciation for the honor. He emphasized the necessity of making people's welfare the central concern of all human activities and institutions, saying that this spirit is reflected in the holistic education offered at SLSU. Describing the sentiment of Filipino independence hero José Rizal that those who plant trees for the sake of the children of the future do so in the knowledge that they will not see the end results of their efforts, Mr. Ikeda shared his belief that education is a challenge to plant seeds of hope and courage in the life of each young person, to cultivate magnificent forests of peace and prosperity in humanity's far distant future. He voiced his commitment to working together with SLSU faculty members and students toward such a vision.

SLSU has eight campuses throughout Quezon Province and has been recognized by the Philippines Professional Regulation Commission as one of the country's most competitive universities, particularly in the fields of nursing, education, engineering and forestry.

[Adapted from an article in the June 30, 2009, issue of the Seikyo Shimbun, Soka Gakkai, Japan]