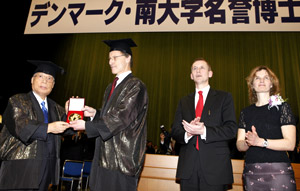 On March 21, 2009, at a graduation ceremony at Soka University in Hachioji, Tokyo, University College South of Denmark conferred an honorary doctorate upon Daisaku Ikeda, founder of Soka University and president of the Soka Gakkai International (SGI). This is the 250th academic honor that Mr. Ikeda has received (see full list of honors and institutions here.)

University College South Rector Søren Vang Rasmussen conferred the degree in recognition of Mr. Ikeda's "long service and valuable contribution to research and practice toward the development of Education for Life," explaining that Soka education has much in common with the strong Danish tradition of "education for life" inspired by N.S.F. Grundtvig, father of the Danish folk high school tradition, and author and philosopher Søren Kierkegaard.

In his speech at the ceremony, Mr. Ikeda stressed the role of education in preventing war, stating that while war separates people, education brings them together. He also expressed his expectations for progress toward nuclear disarmament at talks between the USA and Russia expected during the G20 Summit in London in April. He proposed the establishment of an intergovernmental panel on nuclear abolition to pool the wisdom of the world's scientists and disarmament experts under a framework similar to the Intergovernmental Panel on Climate Change, and urged that the world's people raise their voices in order to realize a world without nuclear weapons.

Jim Garrison, president of the John Dewey Society and professor of the philosophy of education at Virginia Tech in Blacksburg, Virginia, USA, also spoke, underlining the commonalities between Soka education, which focuses on fostering creative thinking and social contribution, and the ideas of pioneering American educator John Dewey.