On November 14, 2009, the Ikeda Center for Peace, Learning, and Dialogue (formerly the Boston Research Center for the 21st Century) held its Sixth Annual Ikeda Forum for Intercultural Dialogue, titled "John Dewey, Daisaku Ikeda, and the Quest for a New Humanism." 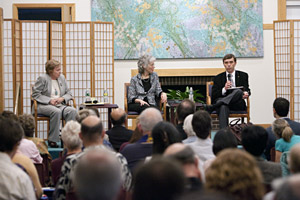 The forum marked the 150th anniversary of American philosopher, psychologist and educational reformer John Dewey's birth. In an introductory lecture by Steven Rockefeller, professor emeritus of religion at Middlebury College, remarked on the shared aspirations of Dewey and Ikeda: "As religious humanists . . . [Dewey and Ikeda] reject all forms of religious authoritarianism, dogmatism and exclusivism without lapsing into a self-centered individualism and a subjective moral relativism. They are concerned to break down the dualism of the sacred and the secular, the religious life and everyday life." Professor Rockefeller acknowledged that further exploration is needed to map out the connections and differences between the two philosophers, in particular how Dewey's understanding of the democratic self relates to Ikeda's concept of greater self or cosmic self.

The keynote lecture was followed by a morning session titled "Inner Potential and Self-Transformation," featuring Larry Hickman, director of the Center for Dewey Studies and professor of philosophy at Southern Illinois University, Gonzalo Obelleiro, Soka University of America graduate and doctoral student of the Program of Philosophy and Education at Teachers College, Columbia University, and Charlene Haddock Seigfried, professor of philosophy at Purdue University. The various remarks touched upon the wisdom of avoiding ideological or ontological extremes; Ikeda calls this practice the third path and Dewey called it adjustment. Both philosophers, explained Professor Hickman, point to paths of transformation that might be described as "guidelines, not blueprints," since the process of adjustment or finding a third path is, for both Dewey and Ikeda, ultimately a very individual one. 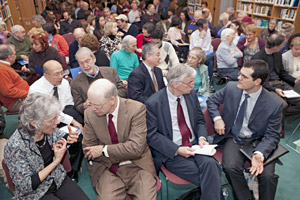 Jim Garrison, professor of philosophy of education in the Department of Teaching and Learning at Virginia Polytechnic Institute and State University, initiated the afternoon discussion on "Social Self-Actualization." Professor Garrison explained that, according to Dewey, individuals cannot develop and realize their own potential, that is, accomplish social self-actualization, without a community in which they are challenged to grow and "transactions" in which they can develop their full potential.

Next to speak was Virginia Benson, former Ikeda Center executive director and now its senior research fellow. Ms. Benson made explicit many of the humanistic concerns shared by Dewey and Ikeda, including their view that the task of education, as Ikeda phrases it, is "the great enterprise of steadily and surely passing on the fullness of humanity from the past to the future." Nel Noddings, Lee L. Jacks Professor Emerita of Education at Stanford University, offered concluding comments. Her views echoed Ms. Benson's observation that the value-creating education Ikeda advocates (known as Soka education) is built on the foundation of helping young people discover their unique interests and ability to contribute to society.

The day's concluding session, featuring all of the day's scholars and questions and remarks from the audience, opened with reflections from David Hansen, professor and director of the Program in Philosophy and Education at Teachers College, Columbia University. Professor Hansen observed that the world of children is "rich soil," in which "future acts of justice, future acts of peace, and future acts of mutual human relationship are going to grow" and that adults must remember that the "work of gardening is slow. You can't force the garden to grow."

The day ended with remarks from Richard Yoshimachi, president and executive director of the Ikeda Center, who cited lines from a poem by Ikeda that encapsulates the individual potential discussed during the day. "Traveler," wrote Ikeda, "From whence do you come? / And where do you go?" Mr. Yoshimachi suggested that the real meaning of education is found in continually reflecting on our own purpose in life and helping others to do the same.

[Adapted from an Ikeda Center report by Mitch Bogen; photos courtesy of the Ikeda Center. Also reported in the November 22, 2009, issue of the Seikyo Shimbun, Soka Gakkai, Japan]