On October 24-25, 2009, Liaoning Normal University in Dalian, China, hosted the Fifth International Symposium on Daisaku Ikeda's Ideals titled "Humanism and the Development of Human Culture." Around 200 scholars and students engaged in research and study of the philosophy and activities of Daisaku Ikeda attended the event, representing 48 universities and 9 research institutes in Hong Kong, Taiwan, mainland China and Japan; sixty-five papers were submitted. 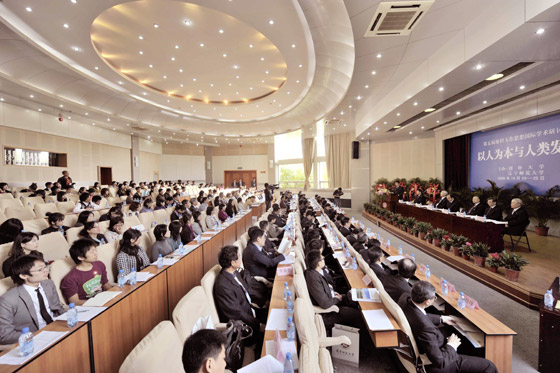 In a message for the event, Mr. Ikeda stated that the human being is the wellspring of all, quoting the influential Chinese writer Lu Xun (1881-1936) who said that when the human spirit is aroused and vitalized, the nation would also progress. Mr. Ikeda expressed his commitment to advancing humanism based on a reverence for life, and shared his resolve to inspire young people around the world to be courageous and hopeful.

Vice President Jia Julin of the Dalian China-Japan Educational and Cultural Exchange Association stated that Mr. Ikeda's philosophy, which elucidates the innate potential of all people that gives rise to new value, expresses the essence of education. In his efforts for and perspectives on fostering individuals of character, integrity and common sense, Mr. Ikeda shares much in common with Chinese sages of the past, said Dr. Jia.

Lu Feng, professor of philosophy at Tsinghua University, Beijing, stated that people are realizing that material wealth does not constitute happiness. Contemporary civilization must break away from the misguided views that spring from dogmatism, pragmatism, economic reductionism and anthropocentrism, he asserted, stating it is through an inner-directed human revolution that humanity can learn to recognize and manifest the truth innate in life. We must learn to listen to our inner voice as Mr. Ikeda suggests, Professor Lu said.

[Adapted from an article in the October 31, 2009, issue of the Seikyo Shimbun, Soka Gakkai, Japan]