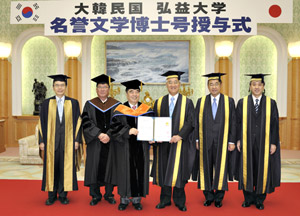 Hongik University began as a college in Seoul in 1946. Today, it offers comprehensive higher education in 14 colleges and 11 graduate schools at campuses in Seoul, Jochiwon and Daehakro, to over 15,000 students. Hongik has over 25 research institutes and conducts academic exchanges with over 32 institutions worldwide, including Soka University. The educational goal of Hongik University, whose name translates as "service to humankind," is to forge strong links between academia and industry that will benefit all of humanity.

[Adapted from an article in the September 5, 2009, issue of the Seikyo Shimbun, Soka Gakkai, Japan]