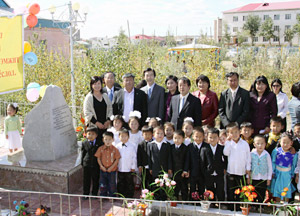 Guests and pupils from the Choibalsan Public Kindergarten No. 12 pose for a commemorative photograph with the Soka Gakkai delegation

A stone engraved with an excerpt of a poem by Daisaku Ikeda themed around Khalkhin Gol (River) and paying tribute to the Mongolian people was recently erected at a peace memorial park bearing his name in Choibalsan, a city in eastern Mongolia. The monument commemorates the 70th anniversary of the Battle of Khalkhin Gol in 1939, a brief but fierce battle fought between Japanese forces and an alliance of Mongolian and Soviet forces in Dornod Province, where Choibalsan is located.

A Soka Gakkai delegation, led by Soka Gakkai International Affairs Executive Director Kenji Yoshigo, attended the ceremony on September 17, 2009, together with Choibalsan Mayor Enkhtsetseg Jargal, Zorig Foundation Executive Director B. Oyundari and some 300 local guests, including schoolchildren from Choibalsan Public Kindergarten No. 12, which stands adjacent to the park. Following the unveiling, a message from Mr. Ikeda was read in which he expressed his hopes for the people of Mongolia and Japan to continue nurturing mutual friendship and working together to spread peace and fellowship throughout the world.

The Zorig Foundation, a Mongolian NGO promoting democracy through social engagement, youth activities and positive political reforms in Mongolia, originally opened Ikeda Peace Park in July 2002 in recognition of Mr. Ikeda's longstanding contributions to Mongolian-Japanese friendship and in commemoration of the 30th anniversary of diplomatic relations between the two countries. The new monument joins another that features opening lines from Mr. Ikeda's novel, The New Human Revolution: "Nothing is more precious than peace. Nothing brings more happiness. Peace is the most basic starting point for the advancement of humankind."

[Adapted from an article in the September 21, 2009 issue of the Seikyo Shimbun, Soka Gakkai, Japan]