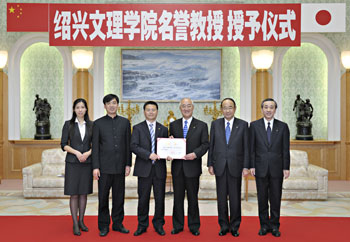 The University of Shaoxing in Zhejiang, China, conferred an honorary professorship upon Daisaku Ikeda, Soka University founder and SGI president, in recognition of his contributions to Sino-Japanese friendship and to educational and cultural exchanges. The conferral, conducted by proxy, was held on April 20, 2010, at the Soka University Central Tower in Hachioji, Tokyo, and was attended by a delegation from University of Shaoxing led by Deputy President Shou Yongming. The certificate of honorary professorship and commemorative items were entrusted to Soka University President Hideo Yamamoto. A poem Mr. Ikeda composed in Chinese characters was presented to the Chinese university as a token of friendship. Exchange professors and students from China as well as Soka University student representatives also attended the ceremony.

The precursor to the University of Shaoxing was Shankuai Primary Normal School, founded in 1909. In 1911, leading contemporary Chinese writer Lu Xun (1881-1936) became the head of the school and is remembered for the personal care with which he devoted himself to guiding students in their growth and development. The University of Shaoxing presently enrolls 30,000 students in 18 departments that include law, education, medicine, engineering and the humanities.

In the conferral speech, Professor Shou described the congruence of the university's educational ideals and Mr. Ikeda's belief that the central purpose of education is to serve as a guidepost in human beings' most important pursuit of discovering the correct path in life. Professor Shou further remarked on the consonance of the ideals and philosophies of Mr. Ikeda and Lu Xun, saying he believed that the students would gain from Mr. Ikeda's life philosophy.

In a message read by proxy, Mr. Ikeda began by extending his deep condolences to the victims of the recent earthquake in Qinghai. He shared that Lu Xun, in his youth, may have crossed paths with the founder of Soka education and first Soka Gakkai President Tsunesaburo Makiguchi, who taught geography at Kobun Institute, a preparatory language school for Chinese students attending Japanese universities. This was the first institution the young Lu Xun attended upon his arrival in Japan at the beginning of the twentieth century. Mr. Ikeda commended the professors of Shaoxing University for inheriting Lu Xun's spirit of wholeheartedly supporting the development and growth of younger generations.

[Adapted from an article in the April 21, 2010, issue of the Seikyo Shimbun, Soka Gakkai, Japan]