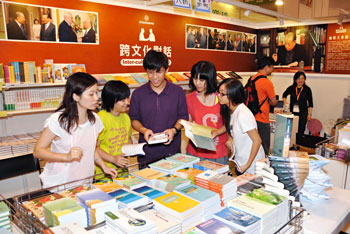 In addition, SGI-Hong Kong sponsored a booth to introduce Mr. Ikeda's works at the Hong Kong Book Fair 2010, which was organized by the Hong Kong Trade Development Council and held at the Hong Kong Convention and Exhibition Centre from July 21-27, 2010. Over 180 of his works were featured and included Choose Life: A Dialogue as well as Chinese editions.

More than 500 organizations from 20 countries participated in the week-long book fair, which is the largest of its kind held in Asia and drew some 900,000 visitors.

[Adapted from an article in the August 30, 2010, issue of the Seikyo Shimbun, Soka Gakkai, Japan]