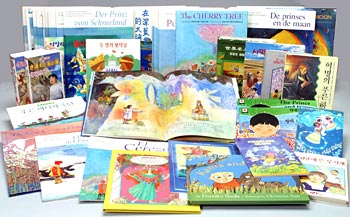 Daisaku Ikeda's children's books have been translated into 19 languages

Over the years, 24 of Daisaku Ikeda's original children's stories have been translated and made available in 19 languages, including English, Chinese, Spanish, Portuguese, Italian, Mongolian and Russian.

Over the Deep Blue Sea, a storybook about three children who overcome age-old prejudices and discover the eternal bonds of friendship, was included in an educational textbook, Building Bridges, released by U.S. publisher Zaner-Bloser, renowned for its educational learning tools. Gale Research, part of Cengage Learning and a world leader in e-research and educational publishing for libraries, schools and businesses, introduces these books as educational tools that teach children the importance of having hope and persevering in the face of hardships and obstacles.

Beginning August 1, 2010, Full TV, a TV station in Santa Cruz, Bolivia, began airing two stories every Saturday and Sunday. The series includes animated adaptions of The Princess of the Desert Country, The Cherry Tree and The Princess and the Moon.

Animated adaptations of Mr. Ikeda's original children's stories first aired in Tagalog on the GMA Network in the Philippines in 2004. Since then, these films, which were originally produced in Japanese by Shinano Art & Culture Consultant in Japan, have been shown in some 24 countries including Iceland, Panama, Spain, Australia, India and Malaysia. They have been positively received for their educational value in teaching young people the importance of values such as tolerance, compassion, courage and friendship.

[Adapted from articles in the July 26 and August 11, 2010, issues of the Seikyo Shimbun, Soka Gakkai, Japan]