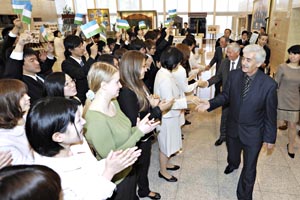 On February 24, 2010, the Fine Arts Institute of the Uzbekistan Academy of Sciences presented Daisaku Ikeda, founder of the Min-On Concert Association, which promotes peace through cultural exchange, and Soka University, with an honorary doctorate for his contributions to the advancement of culture worldwide and his global humanitarian efforts.

The Institute was established in 1928 for the research of ethnic Uzbek music and historical musicology. Now located in Tashkent, it has broadened its field of research to include architectural studies, the performing arts and filmmaking. In 1989, it collaborated with Soka University in mounting archaeological expeditions in Dalverzin-Tepe, a citadel of the ancient Indian Kushan Empire--now part of Uzbekistan--resulting in a total of six joint excavations.

[Adapted from an article in the February 25, 2010, issue of the Seikyo Shimbun, Soka Gakkai, Japan]