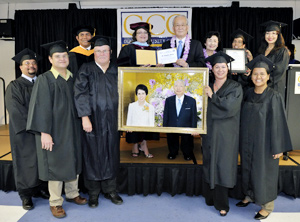 On January 15, 2010, Guam Community College (GCC) conferred its first honorary professorship on Soka University founder and SGI President Daisaku Ikeda for his "commitment to the value-creating educational philosophy of the SGI." Some 130 people attended the conferral conducted by proxy, at GCC in Mangilao, Guam. The event was part of the celebrations marking the 35th anniversary of the founding of the SGI on January 26, 1975, which took place on the island.

Guam Community College President, Dr. May A.Y. Okada, who initially proposed the honorary professorship, commented, "Dr. Ikeda is a role model for us educators. He has shed light on each and every person and devotedly fostered capable people around the world who have contributed to building peace. The more I learned about him, the more I became convinced [of this]."

In a message read by SGI General Director Yoshitaka Oba, Mr. Ikeda lauded GCC as an institution that has responded to the needs of the community and fostered the development of many individuals. Referring to the cultural heritage of Guam's indigenous people, he said, "From ancient times, Guam has been blessed with the Chamorro culture and traditions, a rich and bountiful legacy infused with the sublime spirit of coexistence which draws together the island's diverse ethnic and cultural elements that vibrantly live on to this day. Central to the Chamorro culture is the ideal of inafa' maolek--or, literally translated, 'to make good.' It represents the effort to bring about harmony, the belief in tolerance and compassion for others, and the altruistic spirit of mutual assistance." This spirit, which treasures the fundamental dignity of the lives of others, is what is required in the world today, he said.

Founded in 1977, GCC is a center of higher education in Guam focusing on career technical training, providing opportunities to acquire professional knowledge and skills in a variety of fields, some of which are computer technology, medical technology, marketing, cosmetology, and automotive service.