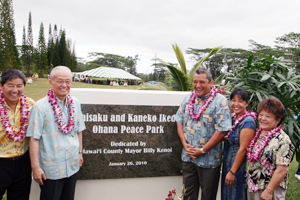 On January 18, 2010, the newly completed Daisaku and Kaneko Ikeda Ohana Peace Park was officially opened in Hilo, on the Island of Hawai'i, USA. Some 400 people attended the dedication ceremony for the park, located next to the SGI-USA Hilo Community Center. The park features a seven-pillar monument engraved with words from 19 eminent peacemakers.

The event was one in a series of events on several of the Hawai'ian Islands commemorating the 50th anniversary of Mr. Ikeda's first visit to Hawai'i, in October 1960, shortly after being inaugurated as president of the Soka Gakkai. Honolulu was his first stop on a guidance tour of the USA and Brazil.

Following a ribbon cutting, opening festivities featured the blowing of conch shells, Keaukaha Elementary School students offering Hawai'ian chants and scattering of salt by local hula dancers. County of Hawai'i Mayor Billy Kenoi presented the International Aloha Culture Award to Mr. Ikeda in proxy, remarking that the SGI leader's commitment to "peace, harmony and friendship has spread throughout communities and cultures all over the world." Mr. Kenoi also announced that the county will host an international cultural concert every October to celebrate Mr. Ikeda's life and work. 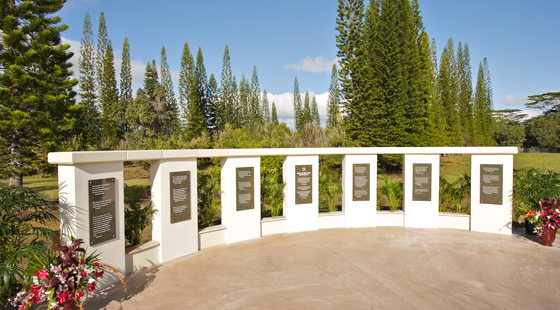