Order of the Knights of Rizal, Philippines, Recognizes Daisaku Ikeda for Commitment to Education and Advocacy of Dialogue 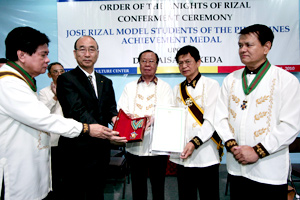 On January 23, 2010, the Order of the Knights of Rizal, Philippines, presented Daisaku Ikeda, SGI president, with its José Rizal Model Students of the Philippines Achievement Medal and Plaque of Recognition in a ceremony held in Quezon City, the Philippines. Mr. Ikeda was recognized for his "uncompromising commitment" to the education of youth and for his advocacy of dialogue to resolve conflict and promote international goodwill and exchange.

The Order is a fraternal organization founded in 1911 to carry forward the ideals of José Rizal (1861-96), a physician, philosopher, artist, writer and poet who played a key role in the Philippine independence movement and was executed by firing squad in 1896 at the age of 35. The Order has over 10,000 members in chapters around the world.

Among the senior officials of the Order attending the presentation ceremony were Supreme Commander Sir Virgilio R. Esguerra and Sir Rogelio M. Quiambao, member of the Council of Elders. SGI Director Masatoshi Konno accepted the medal and plaque on Mr. Ikeda's behalf.

In a message of appreciation, Mr. Ikeda cited Dr. Rizal's intrepid struggle for the sake of his people and passion for learning as "a model that all young people of the world should strive to emulate." He reaffirmed his own commitment to work with youth to facilitate their development and underscored the importance in life of repaying one's debts of gratitude.

Mr. Ikeda was also presented the first Rizal International Youth Peace Award from the Order in 2008.

[Adapted from an article in the February 6, 2010, issue of the Seikyo Shimbun, Soka Gakkai, Japan]