The Chinese university was represented by AUST Party Committee Secretary Zhang Mingxu, Director Liang Xing of the International Exchange and Cooperation Office, and Gao Mingzhong, director of the Center for Research Students.

Thanking AUST warmly for the honor in a message read by proxy, Mr. Ikeda exhorted the young men and women studying at Soka University to exert themselves all the more in their efforts to contribute to society, striving on behalf of those who never had the opportunity to attend university themselves. He said that the primary goal of education should be to guide each individual along their "unseen path" in order to fulfill their purpose in life. Education, he further noted, is pivotal in achieving happiness, prosperity, cultural development and justice, enabling one to triumph over personal struggles and, ultimately, build the groundwork for peace for all humanity.

Established in 1945 as an engineering institute, AUST is presently comprised of 14 undergraduate departments and schools, including management, literature and law, with a student enrollment of some 30,000. 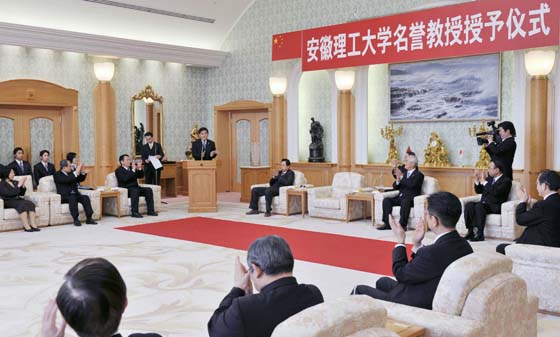 In the citation, Mr. Zhang lauded Mr. Ikeda as an early proponent of Sino-Japanese friendship who has enlightened others through his profound erudition and upstanding actions

[Adapted from an article in the January 28, 2010, issue of the Seikyo Shimbun, Soka Gakkai, Japan]