New Edition of Discussions on Youth Released in the U.S. 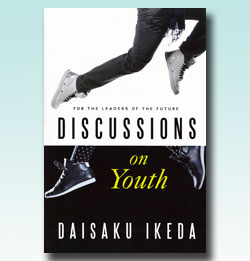 LOS ANGELES, USA: The World Tribune Press, the publishing division of the Soka Gakkai International-USA (SGI-USA), recently released Discussions on Youth, a dialogue between Daisaku Ikeda as Soka Gakkai International president and youth both in Japan and in the United States. During the discussions Mr. Ikeda draws on people, historical events and philosophical inquiry to respond to a broad range of issues that young people, regardless of their nationality or cultural experience, confront.

Originally published in the U.S. in pamphlet form, Discussions on Youth is based in part on The Way of Youth published by SGI-USA's Middleway Press, and a two-volume Japanese work on which both these English books are based.