The Flower of Chinese Buddhism Wins 2010 Next Generation of Indie Book Award in the U.S. 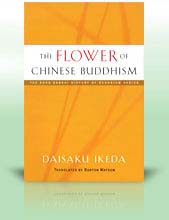 LOS ANGELES, USA: The Flower of Chinese Buddhism by Daisaku Ikeda has won in the religious non-fiction category of the 2010 Next Generation of Indie Book Awards. The Awards are presented by the Independent Book Publishing Professional Group (IBPPG), an organization of independent publishers, editors, writers and other industry professionals.

The Flower of Chinese Buddhism, first published in English in 1986, was reissued in 2009 by Middleway Press, the SGI-USA publishing arm. It is a narrative account of Buddhist missionaries, translators and pioneers in China, tracing the development of Chinese Buddhism and its eventual decline after the tenth century. It is the third work in the "Soka Gakkai History of Buddhism" series, which explores the transformation of Buddhism as it traveled from India to China and then on to the rest of the world.

The first book in the series is The Living Buddha. The second, Buddhism, the First Millennium, was chosen as one of the finalists in the same religious non-fiction category of the Next Generation of Indie Book Awards this year. The three History of Buddhism works were also exhibited in New York at BookExpo America, the nation's largest book fair, from May 25-27, 2010.

The Next Generation of Indie Book Awards are held annually and honor outstanding, independently published books in 60 categories, such as biography, short story, poetry, photography, fiction and non-fiction.