On March 10, 2010, Guangdong University of Business Studies, China, presented Daisaku Ikeda, founder of Soka University, with an honorary professorship for his longstanding contributions to Sino-Japanese friendship and global peace. Mrs. Kaneko Ikeda was appointed an honorary head librarian for her mutual support of Mr. Ikeda's endeavors for peace and for being a role model for young women. The conferral by proxy took place on the Soka University campus in Hachioji, Tokyo, with a delegation from Guangdong University of Business Studies comprising President Wang Hua, Academic Affairs Director Jun Li and Foreign Affairs Director Meng Yang.

The Chinese university was established in 1983 with a focus on economics. It has an enrollment of over 20,000 students in its 17 departments that include engineering, law, literature, business administration and physical science.

During the ceremony, Professor Wang entrusted Soka University President Hideo Yamamoto with the honorary certificates for Mr. and Mrs. Ikeda, together with commemorative items including a large calligraphic work depicting the words "A Great and Boundless Love" for Mr. Ikeda and a brush painting of chrysanthemums and birds for Mrs. Ikeda.

In the citation, Professor Wang paid tribute to Mr. Ikeda for his continual efforts to advance Sino-Japanese relations and global peace, remarking that the Soka University founder upholds the value-creative life philosophy encapsulated in the Lotus Sutra. With the wisdom and keen insight into human society gained from these Buddhist teachings, Professor Wang stated, Mr. Ikeda has advocated egalitarianism and compassionate humanitarian ideals, fostering youth to become global citizens who embrace this creed.

In an acceptance message read by Soka Women's College President Hideaki Ishii, Mr. Ikeda expressed his heartfelt appreciation for the honors he and his wife received. He praised the Chinese university for its emphasis on professionalism and creative research, which has contributed to a 99 percent employment rate among its graduates. He also presented a poem composed in Chinese in appreciation for the accolades. 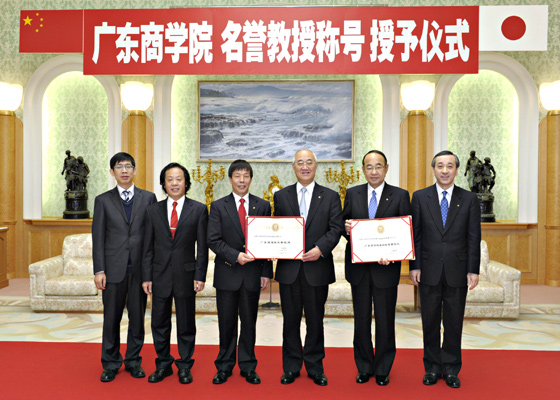 [Adapted from an article in the March 11, 2010, issue of the Seikyo Shimbun, Soka Gakkai, Japan]