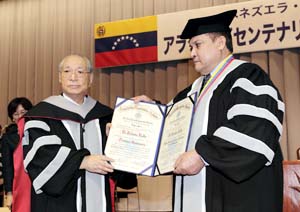 On March 16, 2010, Venezuela's Bicentennial University of Aragua (Universidad Bicentenaria de Aragua (UBA)) conferred Daisaku Ikeda, founder of the Soka Schools System, with an honorary doctorate of education for his service in advancing peace and scholarship worldwide. The conferral ceremony took place in Kodaira, Tokyo, in conjunction with the combined graduation ceremony for Soka Elementary, Junior and Senior High Schools in Tokyo and Kansai, with the two campuses linked by satellite for the occasion.

Mrs. Kaneko Ikeda was also presented with an honorary professorship for her dedication to spreading a philosophy of humanism worldwide together with her husband Mr. Ikeda.

In the resolution read by Rector Guarisma, Mr. Ikeda was commended for his historically unprecedented perspectives as a global citizen and for inspiring others through his belief in humanity and the merit of value creation. The resolution also stated that Mr. Ikeda's influence on young people is particularly important because they must assume responsibility for the future peace, prosperity and sustainability of global society. 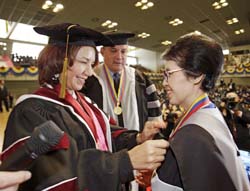 Dr. Gil (left) pins Mrs. Ikeda (right) with the UBA badge, while Rector Guarisma looks on. In his citation for Mrs. Ikeda, the rector remarked that behind every great man there is always a great woman upon whom he relies.

In his speech, Mr. Ikeda expressed his gratitude to the Venezuelan university for the honorary doctorate, which he said he accepted in honor of his mentors second and first Soka Gakkai presidents Josei Toda and Tsunesaburo Makiguchi, the two most influential figures in his life. He also commended Rector Guarisma for establishing a flourishing school system, which, like the Soka school system, encompasses education at primary, secondary and tertiary levels. He described the immense challenge of creating such a system as "a never-ending succession of trial and hardship . . . tantamount to a life-or-death struggle."

Mr. Ikeda then congratulated the graduating Soka students and asked that they become the mainstays of their families, offering their parents and siblings utmost care and consideration. "That effort is itself value creation," he said. "It is the most worthy of acts as a human being." He reminded the graduates of the struggles of their parents to send them to school at a time of serious economic duress.

Founded in 1986, UBA today has a student enrollment of 19,000 studying in three faculties--engineering, socioeconomics and political science--and seven departments.

[Adapted from an article in the March 17, 2010, issue of the Seikyo Shimbun, Soka Gakkai, Japan]