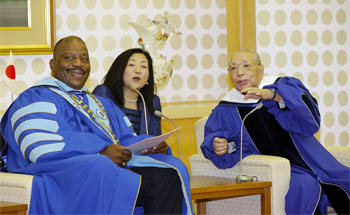 University of Massachusetts Boston Chancellor Dr. J. Keith Motley (left) and Mr. Ikeda (right) converse during a ceremony for the conferral of an honorary doctorate of Human Letters

On November 21, 2010, the University of Massachusetts Boston awarded Daisaku Ikeda, founder of Soka University and SGI president, the degree of Doctor of Humane Letters, honoris causa, at a ceremony held in Tokyo's Shinjuku Ward.

This brings to 300 the total number of honorary doctorates, honorary professorships and equivalent titles conferred upon Mr. Ikeda by institutions of higher learning in some 50 countries for his efforts to build peace and to promote cultural exchange and humanistic education. 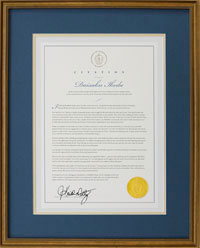 Mr. Ikeda commented: "I am deeply honored. The academic honors I have accepted have all been on behalf of the members of SGI around the world. This is recognition of their multifaceted contributions. As a private citizen, I will redouble my efforts to promote peace, cultural exchange and education."

Mr. Ikeda and Dr. Motley agreed that, particularly in times of great turmoil and confusion, the role of education must be to foster people dedicated to the welfare of humankind.

[Adapted from an SGI press release and an article in the Seikyo Shimbun dated November 22, 2010, Soka Gakkai, Japan]