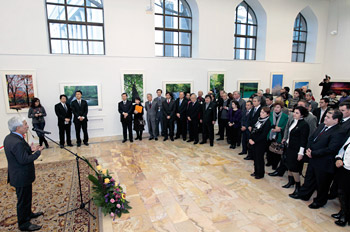 The FotograNica prize for 2010 was awarded to Daisaku Ikeda for his promotion of the art of photography, as well as his efforts to advance a culture of peace, cultural diversity and international understanding. The award, created to honor photographic excellence by national and international photographers, was established in 2010 by the Forum of Culture and Arts of Uzbekistan Foundation, Uzbekistan's Ministry of Culture and Sports, the Academy of Arts of Uzbekistan, the Academy of Sciences of the Republic of Uzbekistan and the UNESCO Representative Office in Uzbekistan.

The conferral ceremony, held by proxy at the Tashkent House of Photography on December 14, 2011, took place during the opening of "Dialogue with Nature," an exhibition of Mr. Ikeda's photographic works. Minister of Culture and Sports Kuziev Tursunali Karimovich entrusted the certificate and a statuette of an angel carved from walnut, whose swallow-like wings symbolize the harbinger of a hope-filled spring, to SGI Vice President Hiromasa Ikeda, who accepted the award on his father's behalf.

Sharing his delight at the opening of the second showing of "Dialogue with Nature" in Uzbekistan in nine years, Minister Kuziev remarked that for many years Mr. Ikeda has contributed to cultural exchanges with Uzbekistan, including joint archeological research and excavation between Uzbek institutes and Soka University in Japan. He said Mr. Ikeda's photography reflects his profound love of and ability to commune with nature and that the FotograNica award symbolizes the Uzbek people's appreciation for his art and his support of cultural endeavors.

Japan's Ambassador to Uzbekistan Yoshihisa Kuroda, Chair Alisher Shaykhov of the Uzbek Chamber of Commerce and Industry, Rector Aminov Khasan Rashidovich of the National Institute of Fine Art and Design and renowned Uzbek sculptor "Ravshan" Mirtadjiev also attended and spoke at the opening.

In a message, Mr. Ikeda expressed his humble appreciation for Uzbekistan recognizing and hosting an exhibition of his photography, despite his amateur status. He said that for him, photography has been like a mirror to his soul, which he strives to continually polish to reveal beauty and spirituality. Mr. Ikeda concurred with Minister Kuziev's belief that artists serve to protect humanity's cultural and spiritual values, and that exchanges among ethnicities enhance such values while strengthening mutual trust and respect, which in turn forge peace and security of our remarkable earth. Photography, according to Mr. Ikeda, is a paean to life for communing with the universe through capturing the eternal passage of time from the past, present, and into the future.

[Adapted from an article in the December 18, 2011, issue of the Seikyo Shimbun, Soka Gakkai, Japan]