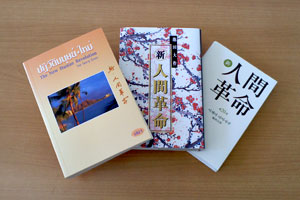 The New Human Revolution is a historical novel detailing the international development of the Soka Gakkai under Daisaku Ikeda, when he was its third president. The series is a sequel to The Human Revolution, which describes the efforts of second Soka Gakkai President Josei Toda to establish the movement in the aftermath of World War II.

Both series are essentially a story of how a profound inner reformation of a single individual can not only dramatically empower one's own life, but also have a significant impact on the betterment of one's family, community and even the world.

An ongoing series, The New Human Revolution is available in many other languages including Dutch, Tagalog, Italian, Spanish, French, Indonesian and English.