The Wisdom of the Lotus Sutra, Volume 3 , and Unlocking the Mysteries of Birth and Death. " /> 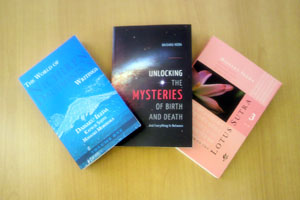 NEW DELHI, India: Publisher Eternal Ganges Press has released English editions of three works by Daisaku Ikeda, The World of Nichiren Daishonin's Writings, Volume 1, The Wisdom of the Lotus Sutra, Volume 3, and Unlocking the Mysteries of Birth and Death.

Both The World of Nichiren Daishonin's Writings and The Wisdom of the Lotus Sutra are discussions between Mr. Ikeda and Soka Gakkai Study Department representatives.

In the first work, The World of Nichiren Daishonin's Writings, Mr. Ikeda discusses the life, legacy and teachings of Nichiren, the Buddhist teacher and reformer who lived in thirteenth-century Japan. Nichiren's humanistic teachings serve as the philosophical basis of the SGI, of which Mr. Ikeda is president.

The second work, The Wisdom of the Lotus Sutra, is a six-volume set in which Mr. Ikeda discusses such core Buddhist perspectives as the sanctity of life, equality and the boundless potential of human beings.

In the third work, Unlocking the Mysteries of Birth and Death, Mr. Ikeda sheds light on the four sufferings that Buddhism holds as universal to all living beings--birth, sickness, aging and death--and how they are in fact indispensable to leading a truly meaningful and contributive life. The work is also available in Italian, Spanish, German and Romanian.

[Adapted from an article in the January 25, 2011, issue of the Seikyo Shimbun, Soka Gakkai, Japan]