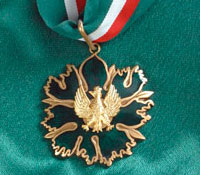 The Ministry of Culture and National Heritage of Poland presented Daisaku Ikeda, SGI president, with its "Gloria Artis," Gold Medal for Cultural Merit, in recognition of his longstanding contributions to deepening exchange of culture and the arts between Japan and Poland as the founder of the Tokyo Fuji Art Museum (TFAM) and the Min-On Concert Association (Min-On). The conferral took place on June 1, 2011, at the Polish Embassy in Tokyo. The award was presented by Minister Bogdan Zdrojewski to TFAM Board of Trustees Chair Kenji Harashima, who accepted the honor on Mr. Ikeda's behalf.

TFAM organized a Japan tour of the "Treasures of Poland: Rembrandt and the Precious Royal Collection" exhibition in 2010-11, beginning with a one month showing at TFAM in August 2010, in cooperation with the Historic Centre of Warsaw and Wawel Royal Castle. In addition, Min-On has sponsored concerts by some of Poland's most-renowned performing artists and musicians including the Silesian Philharmonic Orchestra and State Folk Group of Song and Dance "Mazowsze."

In his speech, Minister Zdrojewski remarked that the accolade being presented to Mr. Ikeda was an expression of his country's deepest appreciation for his efforts that have culminated in the building of a genuine bridge of cultural exchange between Poland and Japan.

[Adapted from an article in the June 3, 2011, issue of the Seikyo Shimbun, Soka Gakkai, Japan]