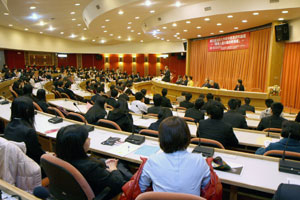 On March 2, 2011, the Daisaku Ikeda Research Center of the Chinese Culture University (CCU) in Taipei, Taiwan, sponsored the 5th Daisaku Ikeda Peace Ideals Research Forum with a theme of developing new humanistic values for peace, culture and education. Thirteen researchers presented papers at the forum, which was attended by some 400 scholars and students from six universities. Moderator Professor Lin Tsai-Mei, director of the Daisaku Ikeda Research Center at CCU which sponsored the forum, commented that Mr. Ikeda has continued for over 50 years to promulgate a philosophy of harmonious coexistence that transcends any differences of culture, religion or gender.

In a message read by proxy, Mr. Ikeda expressed his appreciation and respect for the forum participants for exploring pathways to global peace. For peace to be achieved in today's complex society, he wrote, the various realms of human endeavors, from politics and economics to the sciences, must work together. He also affirmed that educational and cultural exchanges on a grassroots level are crucial agents in the advancement of genuine human security.

In his keynote speech, Dr. Chang Jen-Hu, chairman of the CCU Board of Directors, cited Choose Life, a dialogue between Mr. Ikeda and British historian Arnold J. Toynbee (1889-1975), and Moral Lessons of the Twentieth Century, Mr. Ikeda's dialogue with former Soviet leader Mikhail Gorbachev, for the valuable lessons they imparted. Dr. Chang said the former work underscored the importance of Oriental philosophy in realizing peace in the twenty-first century, while the latter identified developments that should be viewed as being among the most significant in human history.

In the latter half of the forum, the participants split up into two groups to discuss initiatives that incorporate Mr. Ikeda's philosophy in business management and university administration and assess their efficacy.

Dr. Chang and Mr. Ikeda have met on seven occasions, and their discussions were published in a Japanese work, Kyoiku to bunka no oudo (tentative translation: "The Noble Path of Education and Culture"), in May 2010.

[Adapted from an article in the March 12, 2011, issue of the Seikyo Shimbun, Soka Gakkai, Japan]