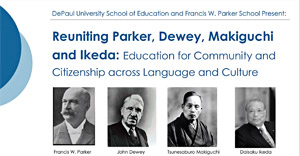 Among the seven panelists was Professor William H. Schubert of the College of Education, University of Illinois at Chicago, and Associate Professor Takao Ito, director of the Japanese Center for Dewey Studies/Soka Education Research Institute at Soka University in Japan. The scholars discussed the primary goals, principles and practices shared by Parker, Dewey, Makiguchi and Ikeda, which include fostering an altruistic spirit of contribution in the service of others. 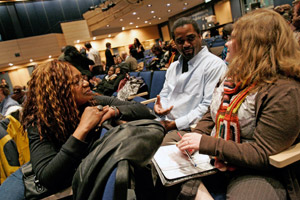 Education must transcend "a mere interest in national competitiveness," said Shubert, developing "an image of citizenship that is world-focused and oriented to the cultivation of humanity." Added fellow panelist Columbia University Teachers College doctoral candidate Gonzalo Obelleiro: "For Ikeda, the moral ideal of democracy, in all its fragility and urgency, must be achieved by means of what he calls education for global citizenship, which he articulates in terms of the Buddhist principle of the three virtues of the bodhisattva: wisdom, courage, and compassion."

Parker (1837-1902), who pioneered the progressive school movement that has as its goal the comprehensive development of a learner from the mental and physical to the ethical, founded the Francis W. Parker School in 1901. Dewey (1859-1952) was perhaps the movement's premier spokesperson. Makiguchi (1871-1944) was a forward-thinking educational theorist who died in prison for his opposition to the Japanese militarist regime in World War II. Mr. Ikeda founded the Soka (value-creating) education system based on Makiguchi's student-centric pedagogical approach.

According to a document recently translated into English, Makiguchi had been inspired after reading an educational treatise by Parker in 1897. "I intend to continue my studies with energy," wrote Makiguchi. "And if I can, through such efforts, prevent Mr. Parker's theories from being disregarded [in Japan] as something concerning only the United States, I shall have, to some degree, realized my hopes." 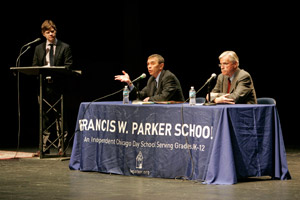 The four other panelists were Jim Garrison and Larry Hickman, both past presidents of the John Dewey Society; Theresa Austin, professor of language, literacy and culture at University of Massachusetts Amherst; and professor of curriculum studies Ming Fang He at Georgia Southern University.

Jason Goulah, DePaul University assistant professor of bilingual-bicultural education, had worked since 2008 to organize the symposium. It drew some 450 educators, students, parents, and local citizens. Hickman, who is professor of philosophy at Southern Illinois University, and Garrison, who is professor of the philosophy of education at Virginia Tech University, have collaborated with Mr. Ikeda in a dialogue that examines Dewey's life and legacy, as well as Makiguchi's pedagogical contributions. A serialization of their discussions has been carried in the Japanese education monthly Todai since November 2009.

Mr. Ikeda was inducted into the John Dewey Society as a lifetime honorary member in 2008.

[Adapted from various reports, websites and an article in the April 8, 2011, issue of the World Tribune, SGI-USA; photos courtesy of Chris Salata]