On October 10, 2011, the European Academy of Sciences and Arts (EASA) presented Daisaku Ikeda with its "Light of Peace" award for promoting interfaith understanding and for creating a united movement for peace in the Far East. The presentation ceremony took place at SGI-Europe's Villa Sachsen Grand Culture Center in Bingen, Germany, with EASA President Dr. H. C. Felix Unger, Bingen Deputy Mayor Thomas Feser and other guests attending. SGI Vice President Hiromasa Ikeda accepted the award on behalf of his father.

EASA, explained President Unger, believes that peacebuilders act as beacons of light for humanity against the darkness it confronts; the existence of even one beacon, in turn, facilitated the lighting of other beacons. "The contributions of President Ikeda symbolize this effect," he said. This was the first Light of Peace award ever conferred by EASA, which also presented Mr. Ikeda with a rainbow statuette to commemorate the occasion.

Based in Salzburg, Austria, EASA was cofounded in 1990 by Unger, a heart surgeon; Franz König, the former cardinal archbishop of Vienna; and Nikolaus Lobkowicz, a political philosopher and former president of the Catholic University of Eichstätt. The academy strives to develop solutions to European and global issues through interdisciplinary study and dialogue. It also aims to examine questions of ethics in science and promote interfaith dialogue as well as communication between disciplines in order to provide broader perspectives on major challenges facing humanity.

President Unger and Mr. Ikeda first met in 1997 and on three subsequent occasions. They collaborated on Ningen shugi no hata wo--kanyo jihi taiwa (tentative translation: "Raising the Banner of Humanism--Tolerance, Compassion and Dialogue"), a dialogue released in 2007 in the Japanese version of The Journal of Oriental Studies, a periodical of the Tokyo-based Institute of Oriental Philosophy.

In a message sent to the presentation, Mr. Ikeda thanked the academy for the award and introduced that EASA and SGI had co-organized nine symposia on interfaith dialogue to date, with the first held by among Christian, Muslim, Jewish and Buddhist representatives just four days after the terrorist attacks on the United States on September 11, 2011.

"In order to forge the foundations for religious traditions and civilizations to engage in a dialogue that will not succumb to violence in any form," he said, "it is imperative that we establish the sanctity of life as a globally acknowledged and appreciated value." 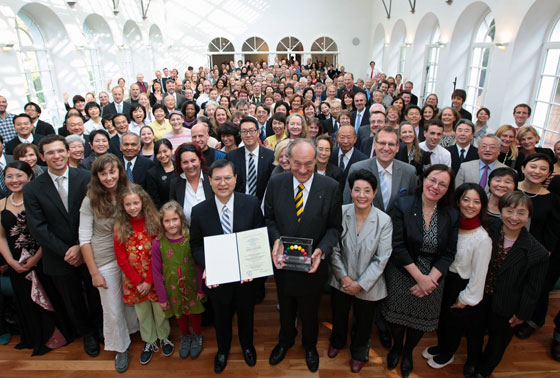 [Adapted from an article in the October 13, 2011, issue of the Seikyo Shimbun, Soka Gakkai, Japan]