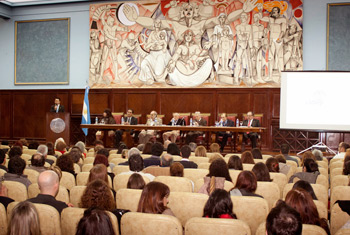 On August 24, 2012, the Daisaku Ikeda International Center for Peace Studies (CIDIEP) opened at the University of Buenos Aires, Argentina. The center aims to engage in research on peace issues and values that strengthen respect for human dignity in all sectors of society, as a nonpartisan, nonprofit organization committed to the pursuit of peace through the promotion of culture and humanistic education. Its activities will include organizing seminars, exhibitions and interdisciplinary workshops on themes such as culture, education, the economy, the environment, sustainable development and other social issues.

CIDIEP was founded as a part of the Jerónimo Foundation, a nongovernmental organization dedicated to public policy research in Argentina. Dr. Francisco Delich, president of the foundation and former vice minister of education and rector of the University of Buenos Aires and the National University of Córdoba, was appointed director.

At the launch, Dr. Delich described how SGI President Daisaku Ikeda's long-standing efforts to create a lasting peace inspired the creation of the center. He also conveyed his hope for the youth of SGI-Argentina to take the lead in spreading CIDIEP's values beyond the borders of Argentina, throughout Latin America and the world.

In a message read by proxy, Mr. Ikeda recalled how he was inspired by Dr. Delich's words from 20 years ago when they had first met in Buenos Aires: peace and abiding friendship carry a powerful, universal message that transcends physical borders and barriers of the heart born of human ignorance and unites people in solidarity. Peace is a basic human right, representing the lofty and unassailable proof of victory sought the world over, he said. Further, humanity must return to the premise that whether it is politics, economics, science or technology, all activities of society must have as their aim humanity's happiness, security and peace. Expressing his appreciation and pleasure that Dr. Delich would be taking the helm, Mr. Ikeda expressed his hope for the center to be a hub for bringing together the energy of youth and civil society toward the creation of a peaceful world and vowed to do his part for the cause of a "spiritual revolution" that will open a fresh history of humanity and global society.

On August 25, some 300 youth attended CIDIEP's first seminar held at the SGI-Argentina Peace Auditorium, in which guest speakers provided a historical and cultural context for understanding the humanistic philosophy which underlies the SGI's grassroots movement for peace. At the seminar, Dr. Juan José Cresto spoke about the history of Japan before and after World War II. Following a speech by Dr. Juan Antonio Seda on the philosophy of Daisaku Ikeda, Dr. Jorge A. Franza shared his perspective on SGI's development into a worldwide movement.

[Adapted from an August 2012 report from SGI-Argentina and an article in the August 31, 2012, issue of the Seikyo Shimbun, Soka Gakkai, Japan]